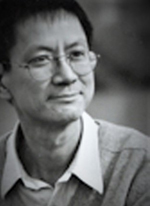 Joseph started working as an artist when he was quite young. Self-taught in his early years, it wasn't until after secondary school that he benefited from formal training by attending graphics courses at Chinese University in Hong Kong. Later he studied with Professor Chen Shou Soo, who had studied in Europe had extensive knowledge of European painting techniques which Joseph learned and applied to his own style. After seeing an etching in a North American gallery, he became intrigued with the process and put down his brushes and focused on the process of intaglio printmaking.

In the early eighties he made four profoundly inspiring trips to Europe. He learned etching in Munich, and took trains to Paris and Amsterdam to study various techniques. Joseph says, "That is where I got my inspiration. . . in the midst of the masters of intaglio". Joseph returned to Hong Kong to set up his own atelier. He traveled throughout the countryside searching out imagery that would inspire his creations