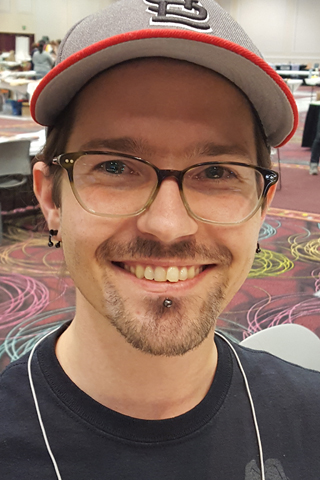 Jacob Crook was born in St. Louis, MO in 1985. Crook works primarily in the intaglio printmaking technique of mezzotint but is also an observational oil painter and draftsman. Crook completed his MFA degree in printmaking from Syracuse University in 2014 and received a BFA with emphasis in painting from the University of Missouri, Columbia in 2009. Crook’s works have been exhibited both nationally and internationally including at the Yekaterinburg Museum of Fine Arts in Russia, the Fort Wayne Museum of Art, and are also displayed in numerous academic institutions and private collections. He currently lives Starkville, MS and teaches at Mississippi State University.

The quality of light cast into a space has the potential to bring poetry to the prosaic, magic to the mundane, and beauty to the banal. The light spilling through these nocturnal landscapes and serves as a sort of spotlight, transforming the scenes into empty stage sets either soon to be entered or perhaps long abandoned, suggesting the possibility of untold narratives that are just out of reach. My intent is not to tell a story directly, but to set the stage in such a way that viewers are compelled to consider the moments before and after the one presented based on their own associations with the imagery.