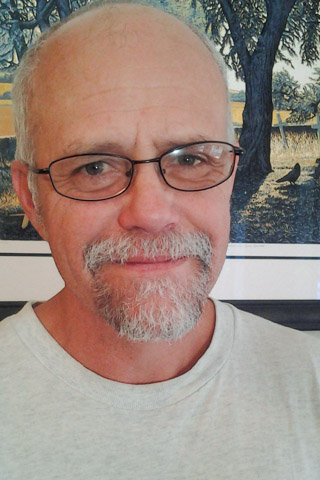 What is most remarkable about the work of Leonardo Nunez is not the range of media he covers. From the etching of small copper plates used to produce his recently completed series of prints depicting the Californiamissions, to murals eighty feet wide such as the RandolphMansion mural (80'x14') located in Lompoc, Leonardo moves easily between extremes. What is most remarkable is his ability to maintain a high degree of craftsmanship no matter what medium or form he is working in. Art is one thing. The fusion of art and craft is another, something not easily found these days.

Leonardo lives and works in Lompoc, California. For many years he has volunteered his time with the California Youth Authority at the Los Prietos Boys Camp. He works with the youth incarcerated there as a drawing and painting instructor, work for which he has been recognized by the County Board of Supervisors. Leonardo also speaks and conducts workshops on a variety of topics, from printmaking and the art of the mural, to color theory and specific media, such as acrylics or oil painting.
Sort Alphabetically: A to Z
12 Per Page
Prev
1 2 3
Next
Subscribe